Order now and get 10% off. Please apply coupon code NOW10 at the checkout to claim your discount. 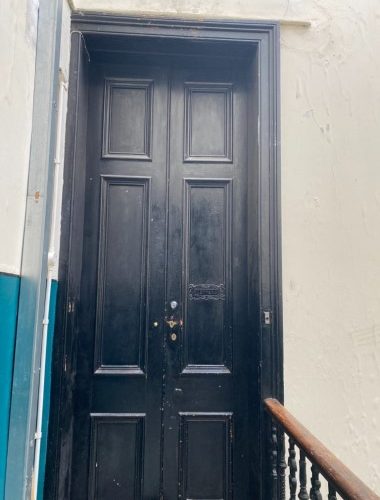 If you are from Glasgow, you probably know that tenement doors have been the standard of residential doors for generations. And if you’re lucky enough, you may even have one hiding somewhere in your house, or maybe lying in your attic. Have you checked?

The value of these unique doors goes beyond any possible replacement which is why a growing number of residents prefer to restore them to their former glory, instead of tossing them away and going for something ordinary.

If you own such a one-of-a-kind gem, we’ll give you a brief insight into the process of how you can renew it and keep the Scottish tradition alive. But first, a little bit of history.

The word tenement comes from a certain type of building with flats on each floor and a shared entrance stairway in Scotland. The tenements in Glasgow were built in the late 19th and early 20th centuries to house a large number of immigrants in the city due to the industrial revolution. And as logic will have you deduce, the doors that were used in tenement buildings were called tenement doors.

Even though the Scottish tenement doors can have the characteristic features of the different decades they come from, the one thing that they all have in common is their size. All the elements of the tenement buildings were sizable, including the doors. The tenement doors are usually larger in size than regular ones, anywhere from 90 centimetres wide to 212 centimetres high.

Nowadays, tenement doors are often restored and kept due to their value and tradition. They can be easily revived through the dipping process and perfectly fit the look of any home. Afterwards, by waxing or with an oil finish, they can be made to match the finish of the other wooden objects in the home. Painting them is also an option.

Why You Should Consider Professional Non-Caustic Dipping of Tenement Doors

Since tenement doors originate from the late 19th and early 20th century, it’s very likely they have been painted multiple times by now. Hence, it’s important to properly remove the paint through stripping before restoring it.

However, you shouldn’t try to do this at home because of the serious health risks that come with manually stripping the doors without experience or the right protective gear such as lead poisoning. Hence, it’s in your best interest to contact professionals like us to do the stripping for you.

We at Scotland Door Stripping use non-caustic dipping to remove paint from any surface, including metal items without causing any further damage. It’s a process that doesn’t burn, destroy, or corrode by chemical action. It can remove practically any coating without solvents, caustic chemicals, toxic or explosive fumes, making it 100% safe for practically any application.

As a result, non-caustic dipping helps protect the surface of a delicate tenement door, removing just the paint and grease from it without causing any wood discolouration.  What’s more, it helps prep the surface so paint sticks more easily to it and allows the colour to shine through.

How to Take Care of Your Door Afterwards

Once we deliver the door to your home, it’s important to take good care of it in order to preserve it in good condition. Bear in mind that external doors have more risk of damage because of changes in humidity and temperature and you should pay extra attention to them.

Taking care of your doors isn’t complicated. Just by dusting and wiping you can significantly extend their lifecycle. This also includes cleaning the handles, locks and backplates with a damp cloth.

When it comes to wooden tenement doors, dampness is definitely your enemy! Any damp areas on the door can lead to swelling and bloating which are somehow irreversible. Hence, make sure your door seals are wiped and dry at all times in order to avoid any dirt or moisture build-up. Also, always check for cracks, because if there are any, moisture can penetrate through them and cause swelling of the doorframe, leading to issues with the fitting.

In the case of an external door, you can keep it dry and protected from the elements using a porch or a canopy.

All in all, you should know the value of tenement doors, but also be precocious when trying to restore them by yourself. The risks that you are putting yourself in aren’t worth the trouble.

At Scotland Door Stripping, we have the right equipment and supplies, including non-toxic solvents to efficiently remove the paint from your tenement doors and revive them. This way they will be ready for a fresh coat of paint to complement the look of your home.

Restoring your old tenement doors is an amazing way to get a unique door that will be a merge between the old and the new, telling a story on its own. We would be more than happy to be a part of the process!

Use our form to estimate the initial cost of renovation or installation.